I stood over him, drenched in blood spatter, my one eye swollen shut from such intense swelling that I could feel it crushing the orb, threatening my vision permanently.

I was panting heavily, my bare chest heaving up and down from the sheer exertion of survival, ignoring the fire of my own wounds.

The Amarrian crowd surrounding me chanted my name. It was deafening and sickening. I felt bile rise in my throat and knew I was going to puke. Instead I hoisted my worn weapon high for all to see, brain chunks from my enemy’s bashed-in skull dripping to the ground as I did so. The roar of their approval was overwhelming.

In some cultures, the victor would cut out the heart of his enemy, supposedly to absorb his powers through devouring it. It was an ignorant and archaic belief. Everyone knew a man’s power came from his testicles.

I knelt down, pulled out my small ritual knife, and his power became mine. 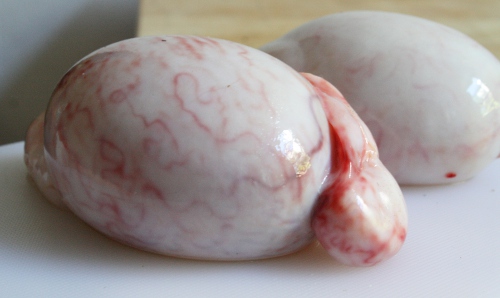 3 responses to “Eat My Balls”