I read the report once more before submitting it on my screen. The Battle for Caldari Prime, as it had come to be known, was a historic event. The media outlets continued to play footage from it 24/7. There was no escaping it. If you lived in New Eden, you knew what had transpired that day, or at least the sensationalized version the media was known for. The ground battles were still underway but not being as grandiose as the sight of thousands of capsuleer ships in orbit, the media had already started interviews with various political figures from both sides, as well as celebrity insights and views from the common citizen of the State and the Federation. These were the stories that would continue to play on until the next big newsworthy item came along. Mysteriously, the stories of the capsuleers and dusters were absent from the media. 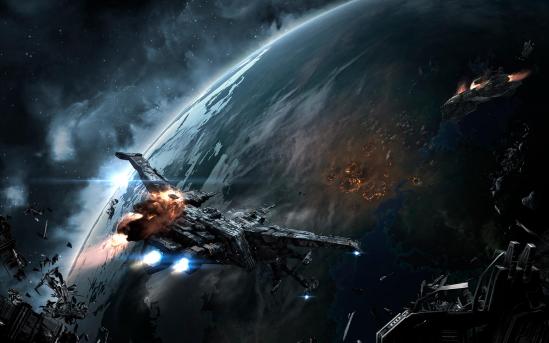 “The Shiigeru is holding steady. Caldari fleet repping her good.”

“Copy that. Concord flagship destroyed. This is going to get interesting.”

“All system gates locked down. I don’t know what’s going on, Colonel, but it smells worse than an Amarr.”

“Are you seeing these feeds? This is insane.”

It had certainly been an event filled few hours. The Gallente Federation had made their move. When the Caldari State had initially reclaimed their homeworld, they had left the Leviathan class titan Shiigeru in orbit. Ground side, the remaining Gallente refugees had been rounded up into containment districts and it had been made quite clear by the Caldari government that should any attack be made by the Gallente Federation, the Shiigeru would bomb those districts, and their citizens, into oblivion. That threat had lasted four years.

Concord had remained silent on the issue.

Earlier that morning, a large Federation military fleet along with capsuleer loyalists launched a surprise attack insystem, attempting to cripple the Shiigeru before it could make good on its promise of destruction.

The Caldari reacted swiftly, fielding an impressive defense fleet allied with hundreds of capsuleer vessels, and the battle was on. Every empire in New Eden quickly responding, sending every available ship to their respective allies and within an hour over two thousand capsuleer craft alone were counted insystem.

“I’m going in. How can they expect us to just sit here and do nothing?”

The Tribal Liberation Force had sent my fleet to blockade Luminaire’s adjoining gates, a deterrent to any that may wish to spread the violence beyond. This battle was for the Caldari and Gallente to decide, nobody else. I thought to myself. Our orders didn’t sit well with everyone in my fleet, many crying out cowardice, many whining about their corpmates and alliance members being involved in the battle without them.

To them I had said, “Really children? Do you wish to go play in the sandbox with your friends? You signed up for this. Serve your duty with honour. Any ship breaking formation and attempting to enter Luminaire system will be primaried and destroyed. Do I make myself clear?”

So we sat, and waited. There would be no glory for us that day.

“Concord has flagged everyone in Luminaire as a criminal. This is going to get ugly.”

The battle continued – Caldari, Gallente, Concord with a mix of Amarr and Minmatar for good measure. Slowly, the Shiigeru was failing. I heard reports that ground mercs, those DUST troopers, were assaulting the containment districts in an effort to free as many Gallente citizens as possible should the assault on the Shiigeru fail. Comm chatter was non-stop from all the closed military channels.

There was a part of me that wished I could be in Luminaire. Even if I had wanted to, the system gates were locked tight. I wasn’t sure how that was accomplished, but it was an impressive feat of sabotage. This had been well planned.

It was only moments afterwards that the crippling blow was dealt to the titan, which began to fall out of orbit. The Gallente and their allies poured on the heavy fire in an attempt to destroy the vessel outright, but titans were notoriously difficult to destroy, and the Shiigeru was proving no exception.

I decloaked my ship and entered Luminaire. I had come back to survey the scene personally, cautiously, on the lookout for salvagers, pirates and opportunistic sons of bitches that wouldn’t leave well enough alone. Wrecks were everywhere still.

The crater of the Shiigeru was visible from orbit, a permanent blemish on the Caldari homeworld. 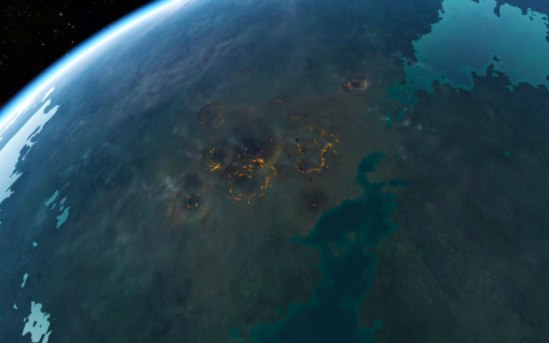 The news media had repeatedly displayed the singular image of the Shiigeru crash site. It was the defining and horrific piece of art that would be remembered most in the years to come. 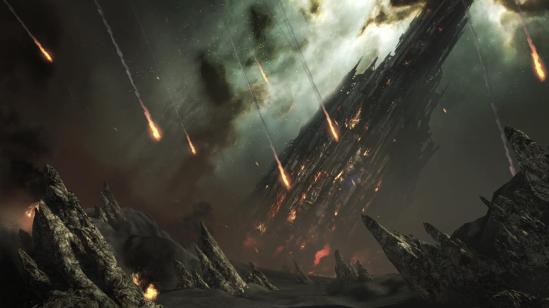 The Gallente Federation had once again claimed the homeworld of the Caldari State as their own. I knew this wasn’t over. I knew the retaliation would have ramifications to us all. What I didn’t know then was how much I would enjoy it when it happened.

One response to “The Battle for Caldari Prime”