NOTE: Please forgive the poor quality images. Someone in my house has misplaced my camera charger, so until then I am stuck taking pictures with my iPhone.

I know, I’m a little slow sometimes, but here is the current state of my office. This summer, I’m laying down some ancient hardwood, unstained or smoothed, and a new antique wooden desk. I think it will look nice, the contrast of old and new. 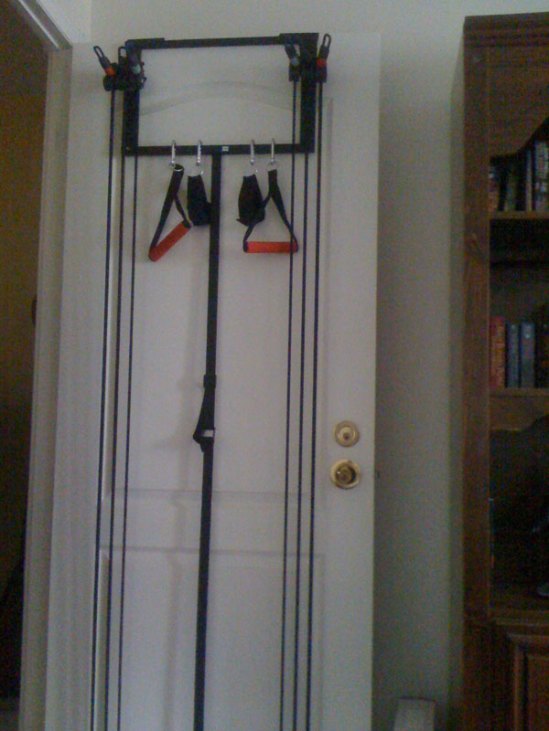 For when you can’t get up in the morning to get to the gym, or squeeze in time at lunch, and feel too lazy to go after work, the Tower 200 is a great pulley gym system to help maintain muscle tone. 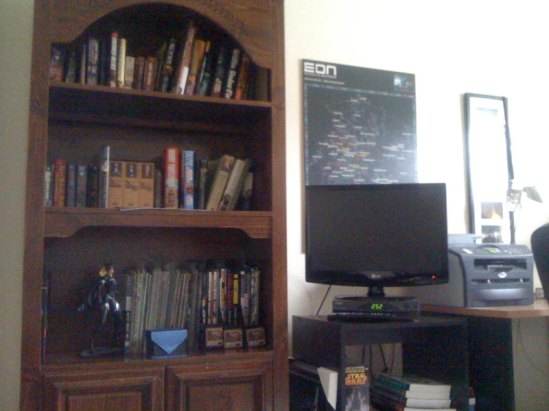 It’s important to balance intellectual pursuits. From comics to alternate history novels to 3D art training and actionscript development to a little bit of HBO on the TV, always keeping the brain engaged is a good thing. In the background, is the EON Magazine EVE Online Regional Map. 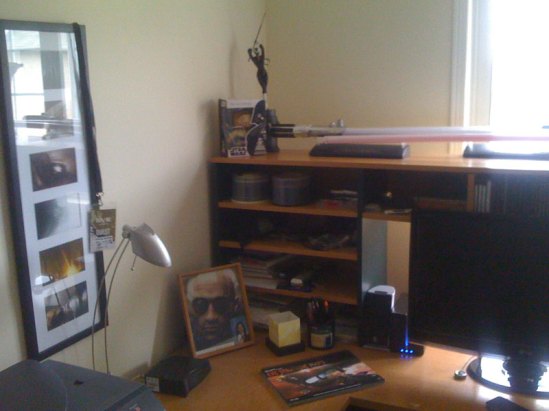 They say you can learn a lot about a person by the way they keep their desk. So what do my desk items tell you about me? Collectible lightsabers on top, Serenity Steele’s EVE Strategic Mapbook at hand, DLink DNS-321 NAS, DIR-655 Router hidden behind, self portrait with smaller, personal picture, LG W2753W monitor. I’ll let you come to your own opinions and observations. 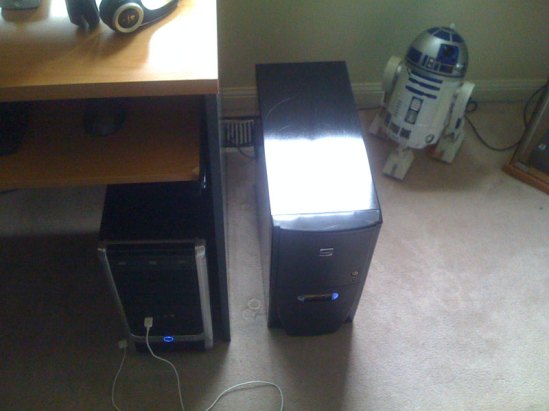 My two gaming rigs: Firetail (left) and Rifter (right). Oh, and R2D2 on the right. 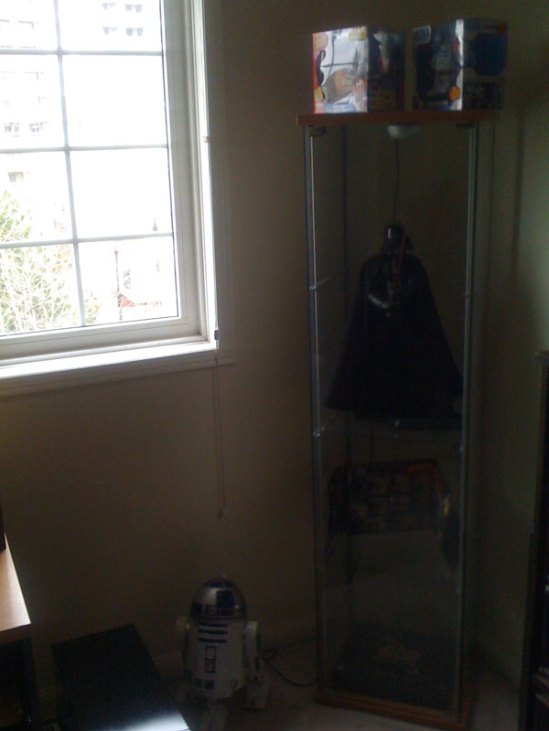 Let’s get this out of the way now, I was a day one Star Wars Galaxies veteran, and played for 5 years. Before there was ever Eve Online, there was Star Wars, the greatest science fiction universe ever created. Ever since I was a child, I’ve loved Star Wars; in fact if not for Star Wars my life choices would’ve been very different so far as career, hobbies, intellectual pursuits, moral beliefs, etc, etc. And yes, Darth Vader was at my wedding last year with a full complement of Stormtroopers.

I almost forgot; that’s Darth Tater and Artoo Potatoo on top of the display case. 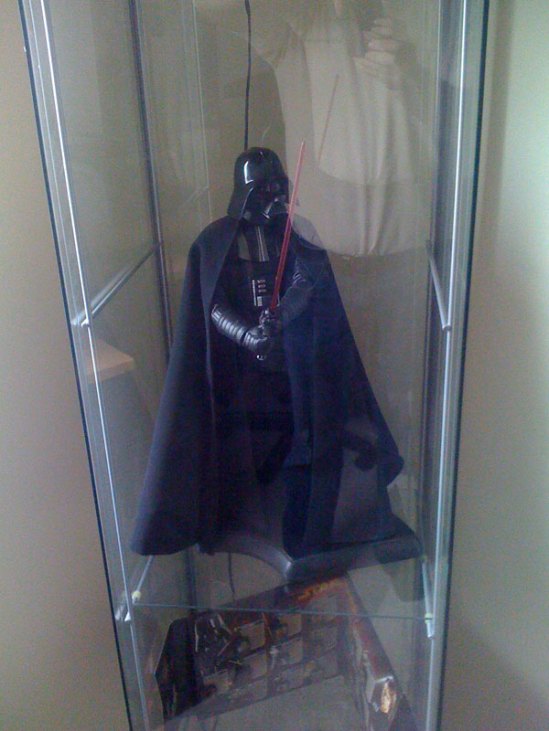 To me, there is no greater science fiction persona than Vader, despite what Hayden Christensen tried to do with him in the newer trilogy. When I had the chance to enter a 3D contest to win this $400 Sideshow Collectible Vader, I was all over it, and the Force was with me. On the second shelf is a collectible pin set of the six movies, and on the bottom shelf is my original Collector’s Edition Star Wars Galaxies: An Empire Divided box set. Such a shame. The original game had so much potential, but Sony Online Entertainment thought they would show how amazing they were at handling the greatest Intellectual Property of all time by not just destroying it once, but completely obliterating it twice.

Be thankful though. If not for that, Roc Wieler might well never have existed.

Also, I apologize to anyone distracted by the reflection of that incredibly handsome and well built man in the image reflection. 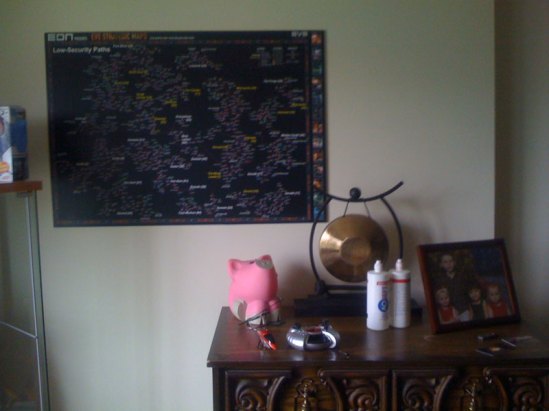 Yes, that’s a real piggy bank. He even oinks when you put money in him. Up front is the best micro copter I’ve ever seen, the Falcon. It’s worth owning just for the Japanese manual translated into the funniest English I’ve ever read. For example, first troubleshooting tip, Controller power switch is “OFF”. Solution: Turn power switch “ON”. Thank God for the Japanese. Only other interesting item on the dresser is the Tim Horton’s gift card (I don’t drink coffee), and the Cult of Eric Cartman membership card.

When I saw this piece I thought it was very well done, even though not entirely my style. Still, glad I bought it. It’s interesting. 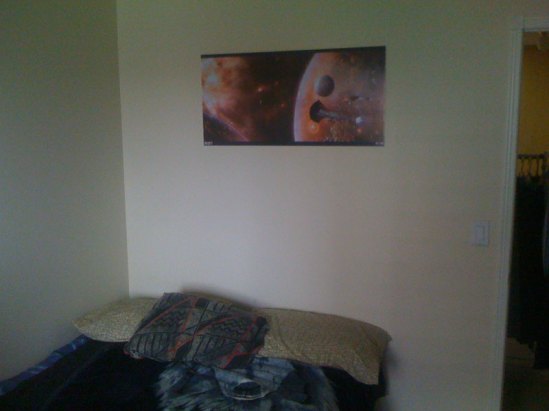 One of the single most impressive pieces of Eve Online I have seen is Iron Tide. Thankfully, EON did up a large poster version of this art which I proudly have on my wall. I hope one day I create such a work that people speak of in the same vein. Also, I have a bed in my office. I tend to overdo things and can hardly make it out of the room before collapsing. 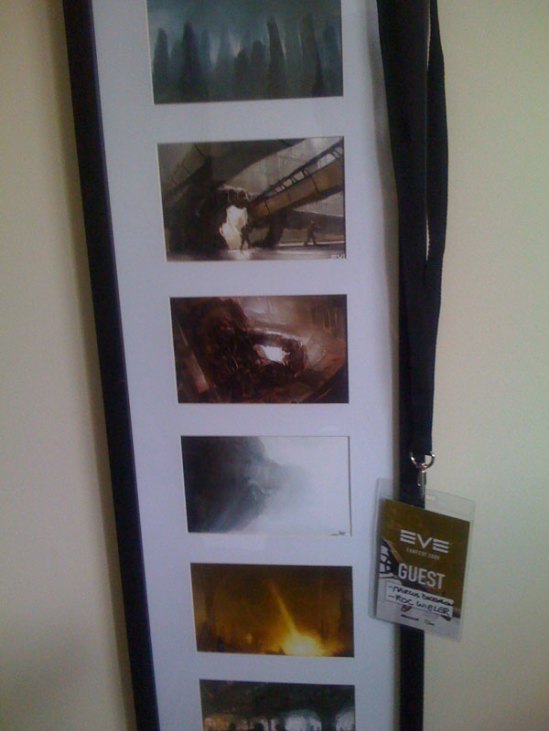 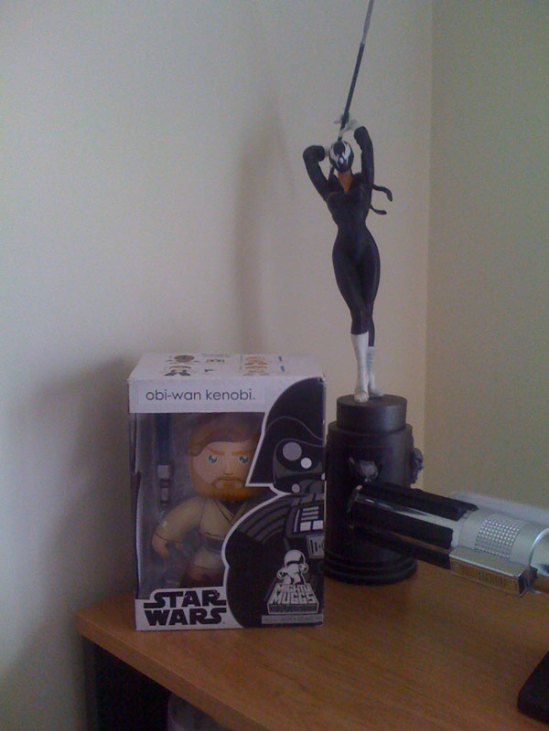 Two reasons this image made it into this post: 1. Christine Spar was the best Grendel, period. 2. That wood block Obi-Wan Kenobi toy has the coolest phrase printed on the side of the package; made from 100% recycled awesome. I liked it so much, I used it on my blog for a while. 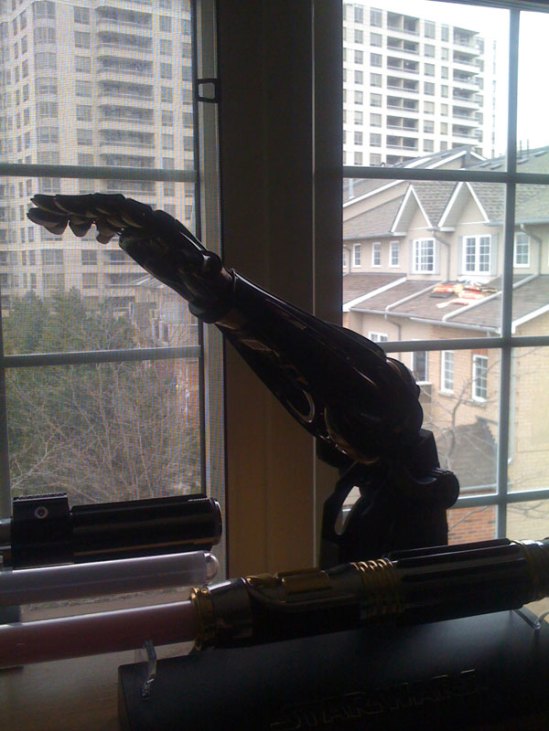 I get the coolest Christmas presents. My friends and family know not to get me lame Star Wars stuff. Instead, I get fully sentient R2 units, the Force Trainer (coolest toy ever made that you play with your frickin brain!), collectible lightsabers, and Darth Vader’s robotic arm. I mean, c’mon, it’s a great time to be a kid (or an adult that acts like one). 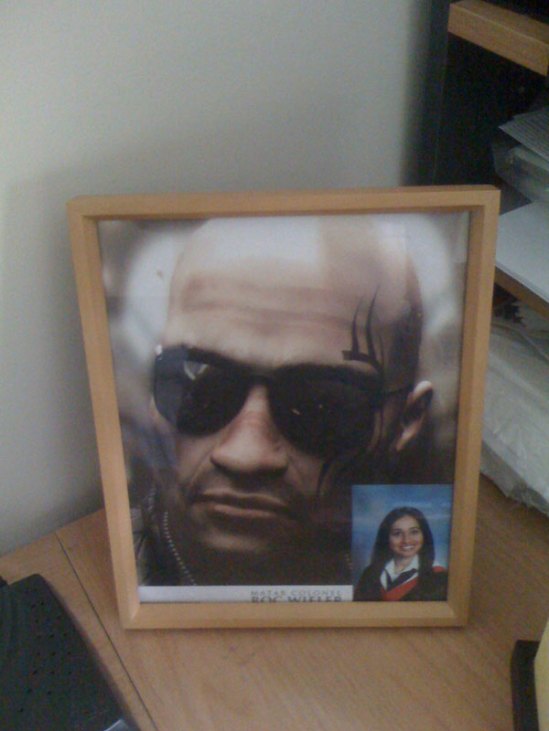 Below are some night shots, just for fun. I don’t actually turn all this stuff on at night, but figured might as well for showcasing my Eve Space. 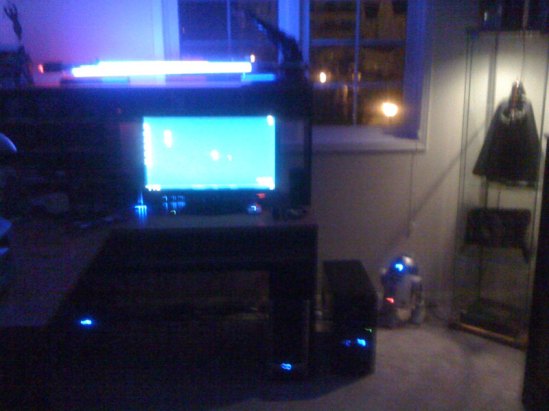 Lots of pretty lights. Didn’t mention the CyberPower unit earlier. It’s the one in the bottom left. 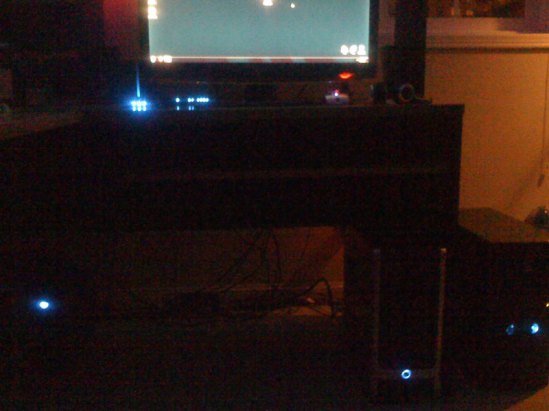 From a lower angle you can see the lights of the Router in the back. And yes, I really am fond of Windows 7. 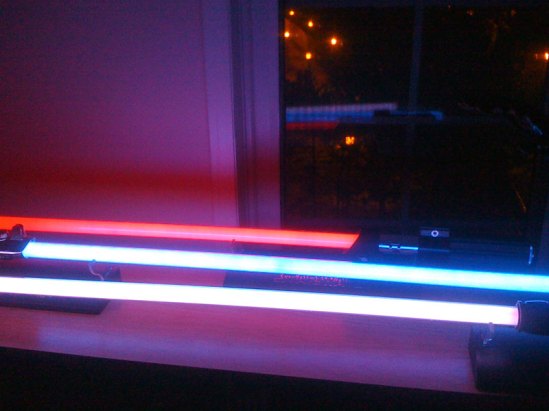 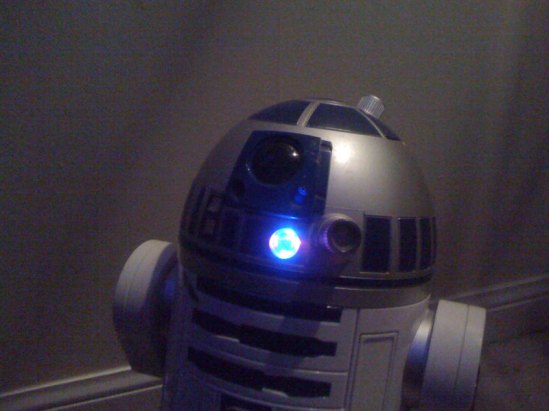 Ok seriously, not enough can be said about Hasbro’s Interactive R2. 360 degree hearing, infrared and motion sensing, flashlight, positional memory, orientation detection, seo services, beer arm, thick treads for plowing across carpet, voice recognition, personality, and the fact that his beeps and warbles start to make sense after a while… R2 really is the coolest. 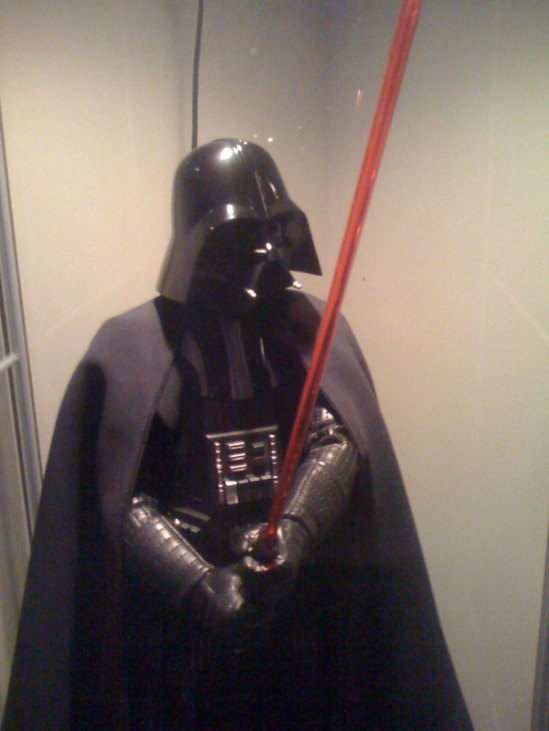 Sadly, I just found out tonight that Vader’s lights no longer work. Shame really. His saber lights up as well as his chest plate and belt lights. It really is impressive, most impressive. Ah well.