Doubt thou the stars are fire; Doubt that the sun doth move;
Doubt truth to be a liar; But never doubt I love.

Docking permission granted. Aura informed me through our neural link.

What did Rixx possibly have up his sleeve now? I wondered as I went through the routine of docking my Rifter, the Ripsack, into its berth. To be fair, there wasn’t much to be done by me as the systems were pretty much autonomous. I just liked to be on stand by in case something went wrong. It wouldn’t be the first time technology had failed.

The familiar groan of metal filled my pod as magnetic beams invisibly clamped down on my ship, keeping it securely in place. Upon occasion there had been trouble over the years from pod pilots returning from their long voyages deep into space. Generally their vanity was subdued after the first few beatings to their atrophied forms, malnourished from months of goo submerged flight. Still, it was enough that CONCORD had put precautions in place.

Another such precaution was the increased security and automated locking systems around every capsuleer captain’s quarters. Sure, it kept the pilots in for the most part, but it also kept the rest of the much poorer station dwellers out.

Back to Rixx. The man had practically been giggling like an idiot over comms, painstakingly try to mask his enthusiasm at whatever was sure to be some epic prank at my expense. It was my own fault for not being as available as many were in Stay Frosty. I still hadn’t seem to let go entirely of my previous lives. Between spending time in Rens, where most of my possessions still were, I found myself skirting Amamake often, looking for trouble. More often than not, it found me, and I would spend the evenings licking my wounds over booze, and my nights licking even tastier over women.

I could feel the release of the connecting spikes as Aura withdrew from my consciousness and I slid from the egress tube of the pod. More automated systems steam sprayed me, a part mix of decontaminating rinse, a part hot steam from the heavens. Naked, I walked the short distance into my quarters and opened the closet. It cost extra, but it was worth shopping at the Nex Store simply for the fact that they guaranteed to have your wardrobe customized to your likes wherever you may go in the galaxy. When I say extra, I mean a regular person would need to take out a mortgage on their property to pay for a shirt.

While dressing I watched the screens, bringing myself up to speed on local news. There wasn’t any, which left me wondering all the more what devious plot had been hatched by one Rixx Javix. Unable to make any more excuses to delay the inevitable, I sighed and opened the door to the main promenade.

And there she stood. 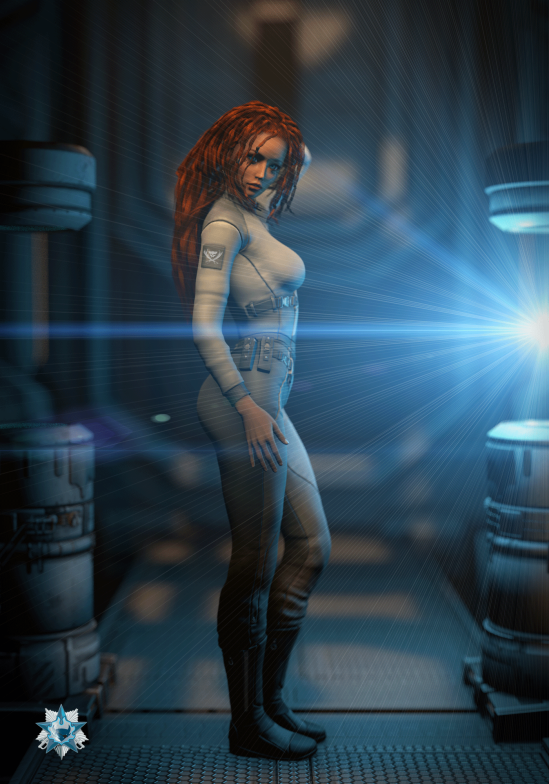 It all happened in the space of a moment. My heart stopped yet beat out of my chest. My mouth gulped yet gaped in shock My eyes bulged yet shook in disbelief. She stood sideways to me, her profile as curvaceous and appealing as ever. She wore a simple utility suit, form-fitting but modest. Her fiery red locks were uncontrollably sprawled around her head, her blue eyes piercing to my soul as her smirk disarmed me completely.

In my  mind’s eye, I played it cool, waiting for her to make the first move. All this time I had looked for her. Our one encounter being met with fond memory but nothing more for a future. I would make her come to me, want me, beg for me.

In my mind’s eye, I ran to her, sweeping her off her feet, spinning around and around until she held on tightly. Slowly, I lower her into a warm embrace, our lips meeting in the most passionate kiss to ever be written about in the history of kisses that ever were or would be. Our romance defied the odds, spat in the face of fate, educated the universe on what true hope could yield.

In reality, none of that happened. She spoke first.

“Colonel.” she said, nodding slightly, a slight hint of sarcasm to her sultry voice. She turned casually to walk the promenade.

“Hellcat.” I replied, matching her tone perfectly as I nonchalantly matched pace beside her.

Inside, my emotions were all over the place – anger, confusion, lust, love, rejection, thankfulness, spite, hope and more all fighting to burst out uncontrollably at any moment. Instead, I just smiled her way as if talking to someone who was once a friend, all the while unable to hear anything she said thanks to the throbbing of my heart in my ears.

My entire universe had been turned upside down. My soul had been made complete. Mynxee had returned to me.

I was very much going to punch Rixx Javix.

3 responses to “My soul made complete”